I am proposing a generic jam recipe reduced to the essentials, applicable to all sorts of fruit. A few jars can easily be made while cooking lunch or dinner.

Ingredients: a kilo of fruit and 700g of sugar.
Containers: five to six 7oz (190ml) jars recently dishwashed.
Kitchen essentials: a knife, a saucepan, a large spoon or a spatula, and a ladle.

– Quickly rinse fruit under cold water.
– Remove unwanted parts: apricot stones*, soft fruit stems, pear cores**.
– Cut large fruit in pieces: apricots in eight, large strawberries in four, etc. . Half to one cubic centimeter morsels, in any shape, is a good size.
– Put in the saucepan with the sugar.
– Put the saucepan over a medium heat and mix fruit and sugar with the spoon or spatula. Over the heat, sugar will quickly melt with fruit juices.
– Cook for 20 minutes from boiling***, stirring regularly. Can be done while cooking lunch or dinner…
– Pour in the jars with the ladle while hot, put the lids on and turn the jars upside down until cold.

That’s it! You have jam you can keep for three months or more in the cupboard****.

Did it take more than 10 minutes to make the jam, cooking time excluded?

I purchased a kilo of William pears on a local market to test this minimal recipe. 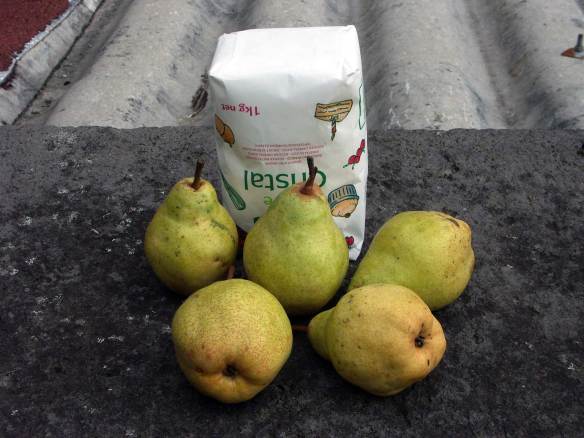 Simplest jam ingredients: fruit and sugar. The five pears weigh slightly less than a kilo. Sugar is granulated white, any sugar would do. Photo 4th October.

Simplest jam utensils: no need for special equipment! A wooden or silicon spoon or spatula would be a better choice to stir over heat. I guess there is one in all kitchens.

Cores ans stems removed, fruit cut. I usually peel the pears, yet followed the simplest recipe here. Not peeling will work well with peaches and nectarines, which have a less granulated skin than pears. I would advise to skin apples. 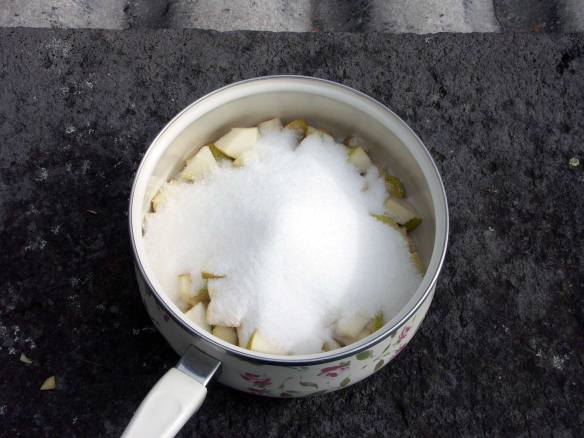 700g of sugar per kilo of fruit: as we had a bit less than a kilo of pears, I added approximately two thirds of the sugar pack, which makes around 650g. Proportions don’t have to be accurate. It could also be 400 or 500 g per kilo, making the jam less sweet, in line with the current trend of lowering amounts of sugar in food. I would then advise to eat the jam within a month, and within a week once the jar has been opened.

As the pears were not ripe yet, it took a while for the sugar to penetrate the morsels and the full 20 minutes for the jam to cook. Stirring enabled to avoid burning at the bottom of the saucepan.

Turning the jars upside down when hot is said to help preserve. I find small jars a good option reminding of the value of their content. I also prefer to have two or four small jars of different jam varieties open at the same time than just one or two large ones. And a small jar is a convenient option for people who eat small quantities of jam.

Often the last jar is not full. It can be eaten in the following days, there is no need to cover it with a lid. Yummy colour, isn’t it?

I used 400g of frozen red currants a friend gave me in July. 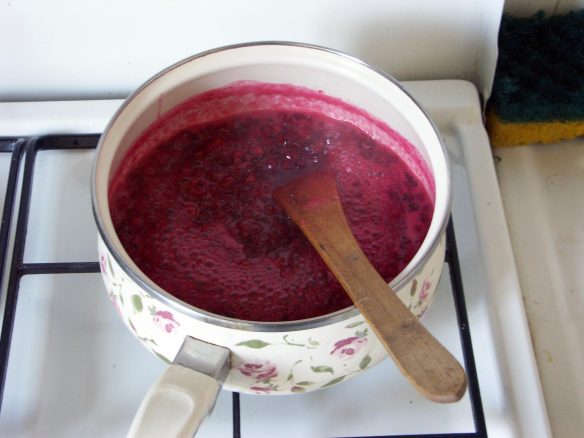 A wooden or silicone spatula or spoon is definitely more convenient to stir the jam.

Red currant jam sets so quickly that when this jar was put back up once cold the jam stayed on top. It doesn’t matter, there is a good chance that it will go back down to the bottom of the jar once open, and in any case it does not change the taste! Speaking of taste, this jam will be even better if you add a few raspberries: 100g raspberries for 300g of red currants instead of 400g of redcurrants, or, even better, 200g – 200g.

Examples one and two: eating suggestion 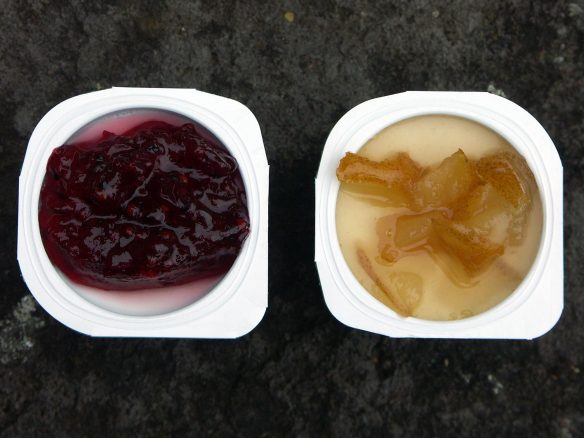 These two jams are very different in taste and consistency, the pear jam being very runny while the red currant jam is set. Both of them will go wery well on top of an unsweetened plain yoghurt. Of course they can be eaten in many other ways.

* Plums are sometimes difficult to stone, in that case just cut the plums in two and remove the stones after cooking.
** Fruit may be peeled, yet skins usually soften enough during cooking (not true for apples).
*** Cooking time can be reduced to 10 minutes for fruit that are high in pectin (see ****).
**** Some jams will set because of the pectin naturally present in the fruit (red and black currants for instance), some won’t (strawberry, pear…). Set jams usually keep for longer.

In any case please check that the jam hasn’t fermented before eating (this hardly happens yet just in case look out for an alcoholic smell when opening the jar). Remove at least one centimeter of jam if some mould has formed on the top (this may happen when the jars have not been properly cleaned). Eat within a fortnight once open (this is general guidance from personal experience, some people would advise that an open jar should also be kept in the fridge).