It will come as a surprise to many, who believe Aurillac is France’s coldest city, that peaches actually grow here. I visited Claude’s garden on 8 August, where he has been cultivating this fruit for almost half a century.

‘As Aurillac is famous for being France’s coldest city, I bravely chose to wait until March to visit them…’ This 2015 comment in the Shanghai Young Bakers blog1 shows that if Aurillac is known abroad for the high standards of its bakery school, it also has the reputation of a cold place that spreads far beyond the country’s borders.

This reputation comes from the weather forecast on national TV, which ‘often indicates Aurillac as the coldest city of France in the morning’2. At 600 meters above sea level, the highest city on the map, it can indeed feel chilly.

Aurillac is my hometown. I know its fresh invigorating sunny mornings and wonderfully warm afternoons. Morning temperatures may be low, but we have higher temperature ranges than most other French cities3, which allows for the warm afternoon feeling. I also like Aurillac’s climate oceanic influences and the quality of the air here4, which I find a major asset after living for decades in larger cities.

However pleasant a place Aurillac is to live, I didn’t think peaches could grow here. I remember a peach tree that didn’t last for very long in our garden when I was a kid. I have eaten lots of cherries, pears and even deliciously sweet and juicy apricots from this garden, but to me, this failing peach tree meant our climate was not good for this fruit.

I was therefore surprised to discover two years ago that a gardener was growing several varieties of peaches in the area.

I thought early August was a good time to visit and see the peaches on the trees. Even if most of them were not ripe yet, I was not disappointed. Here is a tour of Claude’s garden and the twelve varieties he currently grows, which he showed me during the hour we spent together on 8 August 2018.

Claude had mixed feelings about the first tree he showed me. It looked great from a distance, thanks to how he formed it through pruning, but getting closer unveiled another reality.

The shape of this tree, of a well-known modern flat peach cultivar, is a testimony to Claude’s gardening skills. Photo 8 August 2018, Aurillac area, France. 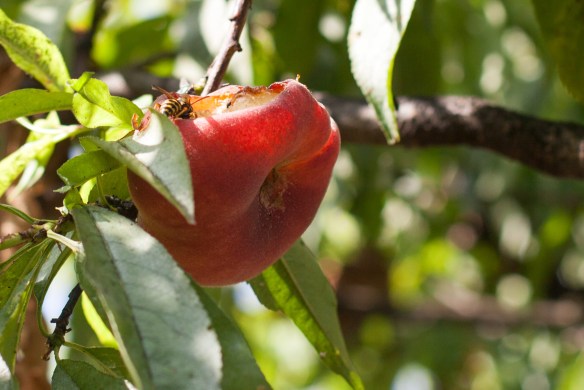 Claude is not happy with this tree and is thinking about cutting it down to a much smaller size this winter. “These peaches are sweet, tasty and have a thin skin”, Claude says. They attract too many wasps, which bite into them too easily. “The fact that my orchard is the only one with peach trees in the area doesn’t help”, he adds. “A wasp can smell sugar fifty meters away.”

There were indeed many wasps and other insects in the tree. “I have had many aphids on this tree this year, and I don’t use pesticides. This also contributes to attracting wasps, as the aphids produce sugary liquid waste, called honeydew, which they feed on”.

Claude was much happier with the second tree he showed me, of a cultivar due to ripen during the second half of August. There were hardly any insects on it compared to the first one.

His peach trees are of different types of varieties: modern, heritage and local. Grosse Mignonne belongs to the heritage category. “This variety is a peach from Montreuil”. Montreuil was a place on the Eastern outskirts of Paris where peaches were grown in walled gardens from the seventeenth century; Grosse Mignonne was one of their most popular varieties5. 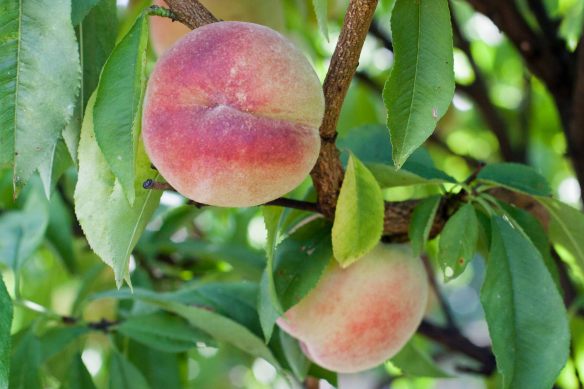 ‘Grosse Mignonne’ is a large white peach, one of Claude’s favourites. It is more resistant to diseases and attacks from insects. There are several ‘Grosse Mignonne’ cultivars, this one ripens early.

The ‘Grosse Mignonne’ tree is one of the very few he has watered during this very dry and hot summer in Aurillac. The soil of his garden is sandy and so doesn’t retain much moisture.

I asked how many peaches he could expect. “I should get thirty to fifty kilos from that tree when it gets bigger”. This year he was expecting around fifteen kilos.

This is another old variety, “created by Mr. Gaillard around 1900”.

These peaches are smaller. I asked about the brown spots on the skin. Claude said that they developed with dew, frequent in the area because of “wide (daily) temperature ranges”.

The three trees above were purchased in nurseries. The fourth tree Claude showed me was grown from a stone he planted, which he said was coming from Lafon, a place near a village called Leucamp. He then named it “Lafon de Leucamp” (literally Lafon of Leucamp). 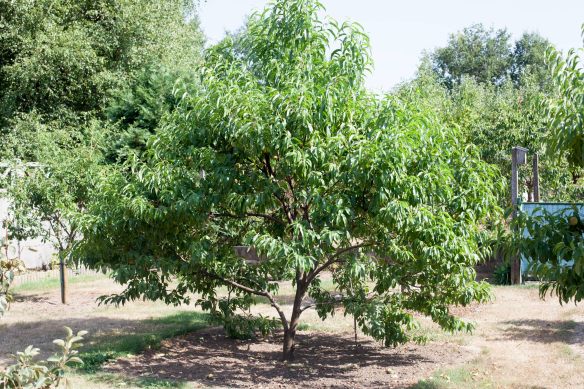 Claude explained that unlike apple cultivars, which require grafting to be replicated, peaches can be propagated through planting a stone, with a very good chance of keeping a variety’s characteristics.

One of Claude’s varieties gets ripe at the end of October, thanks to the sunny autumns we usually enjoy in Aurillac. If I remember well, it is this one.

Claude has experimented a lot since he started to grow peaches in 1971, fourty-seven years ago. Not only has he tried different varieties, over fifty so far, he has also experimented with different tree shapes and sizes.

The two draft trees below, of modern cultivars, were planted in 2017. They should reach 1.50 meter in height and produce from seven to ten kilos of fruit each when adult.

They are easier to take care of, something Claude takes more into account now he is getting older.

These yellow peaches have a beautifully coloured skin. He said the trees were probably two years old when he bought them from the nursery.

Claude has two trees of this new white peach variety he particularly likes for its taste and texture.

We didn’t talk a lot about the first of the two trees below. Claude just gave me the name of the cultivar and mentioned that he would probably remove it at some point.

Like the first tree featured in this article, this flat peach cultivar does not leave up to Claude’s expectations. It is sensitive to disease and requires a lot of care. He mentioned peach leaf curl7, “a disease very difficult to get rid of. Some professional growers treat their trees every week from September up to April/May.” He is more interested in disease-resistant varieties I think.

The tree also didn’t produce much this year.

The dwarf tree below is of a recently created flat peach variety. “We will see what happens with this one”.

This dwarf tree “will be easier to take care of” than the other two larger flat peach trees Claude has in his garden.

The following peaches are smaller for several reasons: the variety, and the exceptionally hot and dry weather conditions that prevented them from growing as normal. Claude said that his trees hadn’t grown since June.

This is a ‘sanguine vineuse’, which produces fruit with a blood-red flesh.

The peaches are indeed very small. However, this is a late variety and the fruit should get bigger by the end of the season.

Claude named this one, grown from a stone given to him by Mr. Bessières, a “Bessières de Vézac”. Vézac is a village located less than ten miles away from his garden. This tree has particularly suffered from the lack of water. 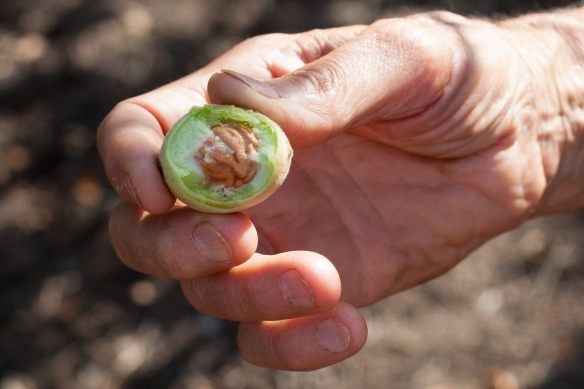 When I called Claude to make an appointment, he said that some of his peaches were only made of skin and stone this year because of the weather. It was the case for this variety when I visited him early August indeed! Hopefully they will get more fleshy before ripening.

Mulch had just been delivered to him to put around the trees and keep moisture, but too late. “This should have come in June”.

Claude doesn’t have a name for this variety. “In 2008, I saw a peach tree spontaneously growing in my garden. Maybe someone had thrown a stone over the fence from the street. I kept it”.

I had been very impressed with Claude’s pruning skills when I visited his garden for the first time in 2017. Photo 23 January 2017.

The tree on 8 August 2018. Claude planted the stone of an “excellent white nectarine” he found at a lower altitude in the Lot district in the South-West of France, next to the Cantal district where Aurillac is located8.

The nectarines will ripen in late summer / early autumn, usually quite sunny in South-West France due to the Azores high.

This was the 12th and last variety currently growing in Claude’s garden, which counted up to fifteen. He started with two in 1971.

Claude also grows other fruit in his garden. He constantly tries new varieties, as well as new arboricultural techniques. He shares his great theoretical and practical knowledge of arboriculture on a regular basis with local amateur gardeners. He is a reference for us all here.

He told me that people he meets in warmer regions of the country such as the Ardèche don’t believe him when he says he grows peaches in Aurillac. Well, here is evidence that he successfully does.

When asked whether Aurillac is a good place to grow peaches, Claude replies that there is only one major issue here, late frost which can occur when the trees blossom in April or even May. He estimates that it significantly reduces fruit production once every six years.

Apart from this particular issue linked to Aurillac’s altitude, he says that in his experience peach trees are quite cold resistant, and that the wide temperature ranges we have here even make the fruit tastier and the varieties hardier. If I understand his view and correctly report it, it is because trees produce more phenols9 and phytoalexins10 in response to temperature variations.

I am certainly going to investigate this question of phenols and phytoalexins further, which he says he has been researching for many years. I intend to discuss with him and read research articles about the relationship of plants with their environment11. As for experimentation, Aurillac and the mountains around are a good place to study the effect of temperature ranges on fruit trees I think.

Coming back to Claude’s advice to amateur gardeners, according to him those who have a light soil in their garden, in which peach trees thrive, should plant a pêche de vigne for the best chances of success. There are many varieties of pêche de vigne, not limited to the blood peach often cited in the UK12. Pêche de vigne indicates more a type of variety than a specific one13. They are relatively small peaches of hardy varieties, many of them late, with various skin colours and white, yellow or red flesh14.

There is also the option of the local ones. Stones can be given by a fellow gardener or even found on a local market. I bought wild white flesh peaches with a yellow skin on Aurillac’s market early August which were slightly bitter, as many wild peaches, but very tasty. I kept two stones which I may plant someday.

After all, Claude provides sensible advice to the amateur gardener, which is valid for other fruit such as apples and pears: go for hardy varieties. It’s like dealing with chilly mornings in Aurillac: to enjoy a breath of fresh air, wear a jumper.

2 thoughts on “Peaches in chilly Aurillac”