We found our trip to Tuscany quite refreshing despite the June heatwave. The history of the Italian province may not have been one of undisturbed peace and harmony, but the hills above Vinci felt like a haven in our times of globally threatened biodiversity.

We arrived in Vinci, Tuscany, just the day before the end-of-June 2019 heatwave struck Europe, on the evening of the 25th. Temperatures didn’t peak as abnormally as in France1, yet the daily highs were 5-8°C above average from Wednesday 26th to Sunday 30th, culminating at 39°C on the 27th2. Coming from the South Coast of the United Kingdom where the previous weeks’ temperatures hardly went over 20°C, we had to adapt.

It was somewhat a good introduction to what made us travel to Italy in the first place, an international conference called ‘Utopia, Dystopia and Climate Change’ to be held in Prato from 1 to 5 July3. We had to put up with unescapable heat, one of the dreaded consequences of climate change in the coming centuries. Fortunately, we were on holidays in peaceful Tuscany and the experience proved to be far from dystopian.

When I looked for a place to stay in the hills, I realised that the area above Vinci was covered in olive trees. Satellite imagery confirmed the extent of olive cultivation in the region visible on guesthouses’ advertisements. We looked forward to staying there for a few days before going to the conference.

Vinci, like many Tuscan villages, is surrounded by vine and olive trees. Photo taken from the Leonardo da Vinci Museum 26 June, Tuscany, Italy.

Early morning, up in the hills. Olive trees around the houses. Photo 30 June.

Overlooking Vinci and its surroundings. To the left, the house where Leonardo da Vinci was born. Centre right: the village, where he grew up. In the foreground: an olive tree to the left, an apple tree with apples on it and a cherry tree behind it to the right and a vine in the middle.

The four kilometres of winding road above Vinci were bordered by olive trees almost all along.

Between Vinci and the top of the hill, it’s olive monoculture.

The terraces in the steepest areas were probably built for olive cultivation a long time ago. 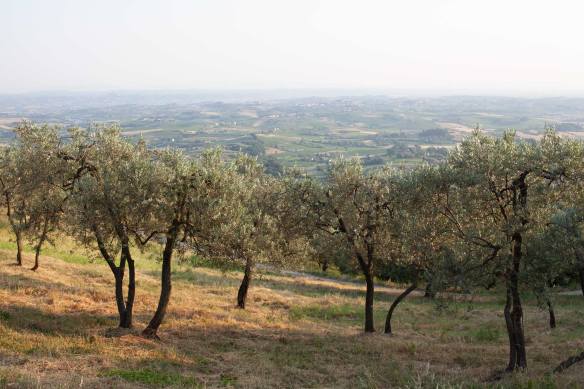 Hot, but full of life. One night, sitting on this wall, we felt enthralled by the silent dance of fireflies winding among the trees. Photo 30 June.

Olive monoculture made me think about biodiversity. What was it like in these Tuscan hills? Fireflies are a sign of a biodiverse environment. We saw many others, from insects to fruit trees. The pictures below were taken within three hundred metres from our guesthouse.

Twelve insects including six butterflies can be seen in this picture of a lavender bush. Photo J. Cattaneo, 30 June. 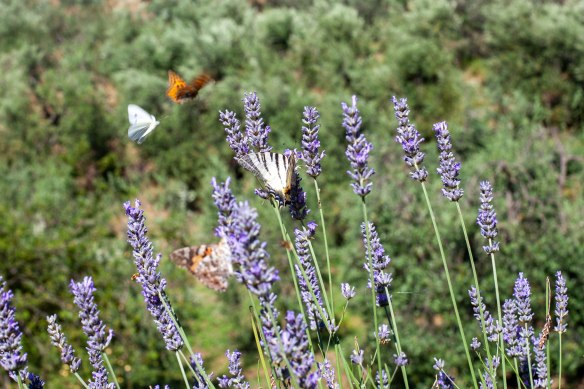 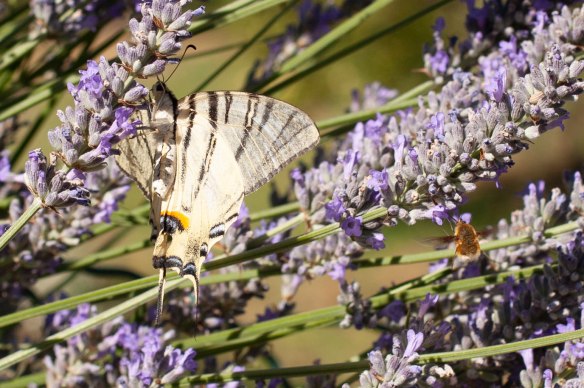 Butterflies and other pollinators cohabit.

One of the many swallows that feed on the insects, and its offspring. Photo 26 June.

Poppies on the edge of a field where the grass is left to grow. Photo 30 June. 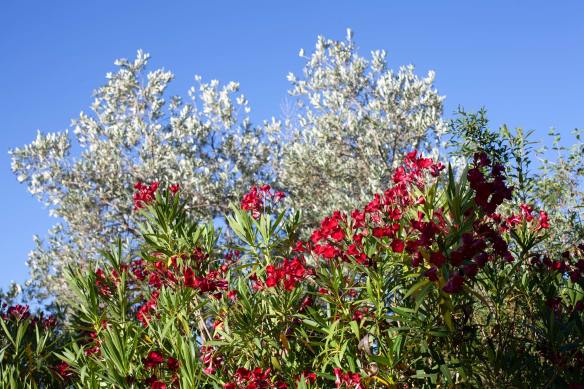 Nice to remember the flowers and olive trees under the blue skies of the Tuscan countryside as I am editing this article in autumnal Britain.

From floor plants to trees. Not sure what kind of fruit this tree was bearing. Photo 26 June.

Fruit trees in a bushy edge: apricots to the right and yellow plums to the left (enlarge to see the fruit). Photo 30 June.

Figs are the second most common fruit after olives.

A pear tree in the garden below our guesthouse, where plums and apples were also growing.

A peach tree in front of our door. 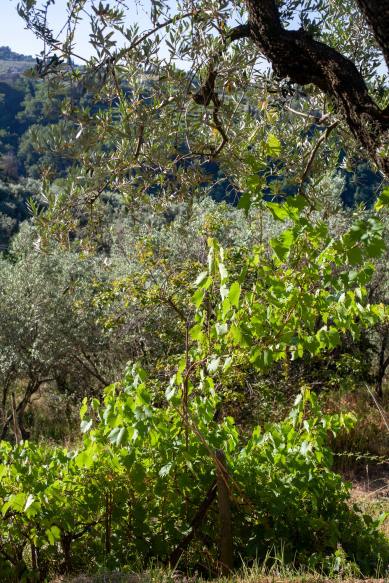 There were also vines within this small perimeter around our guesthouse, and probably other productive plants I didn’t notice, such as cherry trees, quite common in the area.

Some of the fruit: plums, figs, pears and apricots.

The gardens and fields around our guesthouse were full of a diverse vegetation. What was it like a bit further away, in the olive groves?

I don’t know whether all the olive groves were exploited, but in many of them there was a thick vegetation below the trees. Photo 29 June. 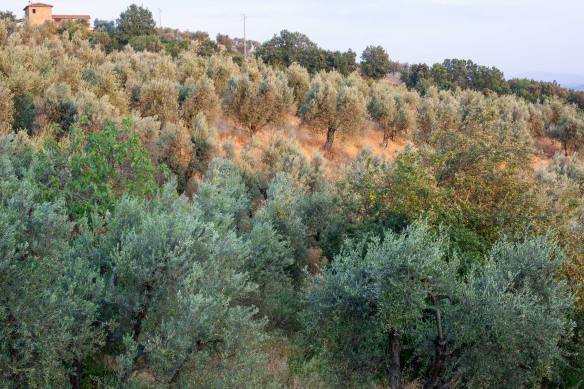 Olives are not the only fruit growing in the groves. There are apples to the right and figs to the left. 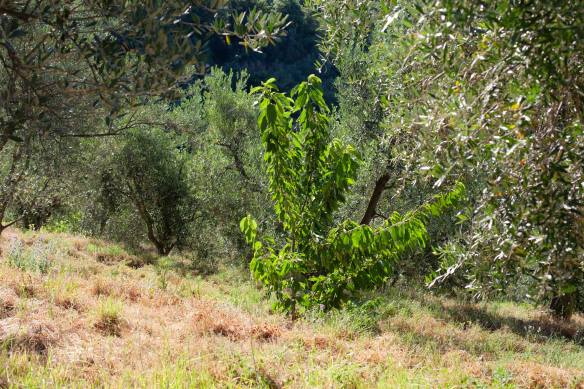 A variety of trees on terraces, including one recently planted. The landscape has been shaped by human intervention.

Small patches of vine among the olives, which, along with the four pictures above, provide a different image of  ‘monoculture’. It may be monoculture, however the olive groves appear to be biodiverse.

The hills above Vinci may be a land of olive monoculture, but we felt quite good in this environment. Not only did we find it refreshing to be located in the country in the middle of a hill dominating the valley, rather than in the middle of one of Tuscany’s busy cities, but also the place appeared to be a well-balanced, full-of-life sustainable ecosystem which made us feel comfortable despite the heatwave.

It would have been great to go beyond these first impressions, those of two people who visited these hills and walked in olive groves for the first time in their lives. With more time, I guess we would have talked to farmers and gardeners, searching for insights into the extent of this biodiversity and how the productive system in place works with it.

There is also the question of how this system has evolved, and how stable it is today. Agrarian and environmental history specialist Pr. Dario Gaggio4 demonstrated that the landscape of rural Tuscany was reinvented throughout the 20th century in a context of social, political and economic unrest. I have only read an overview of his book ‘The Shaping of Tuscany: Landscape and Society between Tradition and Modernity’, however it is easy to imagine what happened. From the ‘rise of Fascism’, ‘particularly violent in rural Tuscany’ to the ‘struggles between Communist sharecroppers and their landlords’, then the ‘flight from the farms in the 1950s and the 1960s’ and ‘the emergence of the heritage industry’ which ‘has raised the spectre of commodification’5, there would be many reasons to believe that rural Tuscany’s troubled history had a strong impact on the local eco-system in Vinci and that it is not, as a result, as rich and robust as it might look.

Having said that, in our view human intervention didn’t prevent biodiversity from thriving. It may be that our tourist eyes were not sharp enough. It may be that the intensive farming methods developed by the agro-industry couldn’t work or were not welcome in these steep areas. But it may also be that nature is resilient, or that the Tuscans created a virtuous relationship between nature and culture. The summary of the paper ‘Rural tourism driving regional development in Tuscany – The renaissance of the countryside’6, combined with our own experience of the place seem to provide evidence of the latter. They suggest that the Tuscans have been successful at generating the feeling of timelessness and harmony that we enjoy when visiting the province today, hopefully also felt by permanent residents.

The Tuscan case, showing both struggles and successes, could provide useful insights for the development of regenerative models of agriculture that nurture biodiversity, and would therefore be worth researching further in my view.

This article wouldn’t be complete without a picture of olives, the main crop cultivated on the hills above Vinci. I found refreshing to see nature at work and actually producing. Photo 29 June.