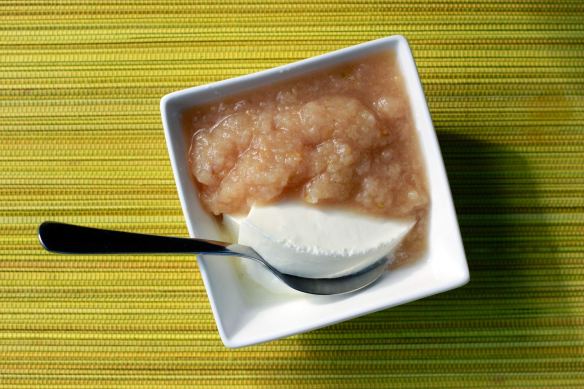 Compote, or mashed stewed fruit, as we may call it, is the simplest way to use local fruit at home, second behind biting into it!

It enables to eat the fibers the fruit contains, and diverse healthy ingredients can be added, in or beside. Garden fruit also makes it quite nutritious.

It is a preserve that lasts for a few days, and there are ways of making it last for much longer.

And last but not least, a full palette of possibilities is open to the creative cook, which anyone of us can be in that particular case, to compose a taste buds heaven!

How simple is it to make compote? Have a look here…

Peal and cut 500g of pears and 500g of apples and put them in a saucepan with 5cl of water. Add 100g of sugar, the juice of the quarter of a small lemon and a hint of vanilla. Cook over a gentle heat for 10 to 15 mn, mash it in the saucepan with a masher or even a fork* and you have your compote! As simple as that!

This compote will keep for a week in the fridge and will provide around ten servings. It can be made in as little quantities as wished, for instance one apple and one pear will make a good serving.

Even simpler: the lemon is added to give some acidity and help preserve the compote, the sugar is added for sweetness and has the same conservation properties. If the compote is  intended to be eaten just after it has cooled down, there is no need for these ingredients. The vanilla itself is unnecessary, in particular with tasty and ripe garden fruit. It can be just “pure fruit”! And of course it can be made with just apples or just pears. Plums will make a very good one too!

Then how to eat it with is a question of personal taste. How do I like it? Slightly warm, topped with a spoon of Cornish double cream and a biscuit, for instance a shortbread. It reminds me of my mother’s “Pâté aux Poires” (sort of pear pasty), which she used to make when we had a family gathering at my grandfather’s country house in France. Good memories, but, more importantly, here and now in Southfields, we feel the magic of good and healthy food when we eat this compote!

We made larger quantities of the above compote for Fruit Day, as well as two other variants, in a professional kitchen in Earlsfield.

We didn’t peel the fruit, we only removed the stalks and the damaged parts. This enabled to keep even more of the fruit, and to process it faster. Once stewed, we passed the fruit through a sieve with a medium grid, which gave the compote its texture. Passing it through a finer grid would have given a smoother puree, equivalent to the texture of a baby food.

The pears came from the same tree as the pears used for the pear and lemon jam described a few days ago (see ‘Pear and lemon jam’ under the “Abundance Fruit Day 21st Sep 2013′ heading). The beauty of this particular picking was that the pear tree is in between two gardens and that we picked from both, the first garden owners having introduced us to their neighbours.

The apples were given by Abundance Wimbledon.

One of the variants was a ‘apple, pear and blackberry’ compote. The blackberries were picked in Wimbledon Common. 200g of blackberries per kilo of fruit enabled to reach the colour and the distinctive taste that Abundance Fruit Day visitors were able to experience at the tasting stall.
Having said that, it is a shame that the tasting experience was not structured enough to collect people’s impressions, as we did a week before at the Wimbledon Common Stables Open Day (information about this event to be uploaded soon). Next time.

I can just say that the ‘apple, pear and blackberry’ compote is an interesting variant that already takes the cook and the consumer far beyond the mere stewed apples experience, without really adding complexity to the cooking.

The sieve also enables to remove the blackberry seeds, and sieves, or ‘moulins’, like the one below, or its supermarket equivalent in plastic, do that very well. So at home too, the fruit can be stewed unpeeled and all the unwanted bits removed afterwards through the sieve to obtain the soft texture of a compote or a puree. 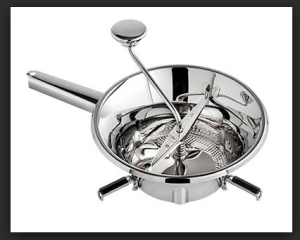 So, here are images of the second and third variants of compote made for the Abundance Wimbledon Fruit day 21st September 2013, on top of the ‘apple, pear and vanilla’ picture shown at the top of this article: Don’t you feel like trying to make and eat some for dessert or breakfast? 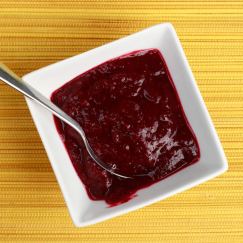 * Making compote with cooking varieties such as Bramley apples or Victoria plums makes the use of a masher unnecessary, especially when the fruit is ripe. Eating varieties, and hard pears, may require a longer stewing time. In that case the masher or the sieve may be quite useful, but what about just stewing the fruit without mashing it? For instance the texture of pear morsels, which will soften after stewing even if the pears are hard when raw,  can be just great!