Adding enough thickening agent to a jam is a quick way of making the delicious sweets that we call in France ‘pâtes de fruits’. Probably not a recipe for complete beginners, but still not very difficult. 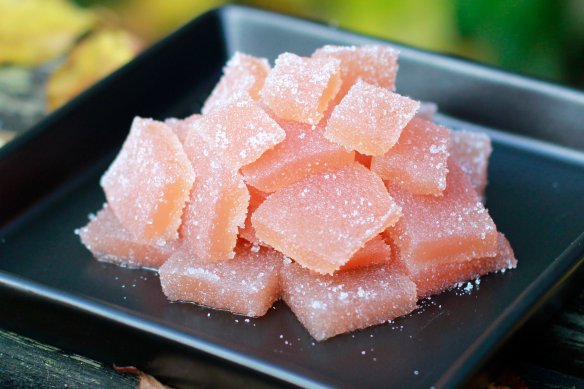 I wanted to make some of these sweets for Christmas with quinces left from our pick in a Raynes Park garden two months ago. I initially intended to make membrillo and leave it to dry for a few days. I chose to use agar agar to get a faster result. It would also be an opportunity to test a recipe I found in several French cooking websites.

I purchased agar flakes in the trade. I must say they were almost three time more expensive than the gelling agent from animal origin that was sold next to it. I bought the agar flakes mostly because they are trendy but I am sure the other gelling agents are as effective at thickening.

I followed the instructions on the pack to get a firm jelly: add one tablespoon of agar flakes to 240 ml of liquid and stir for ten minutes from boiling point. The ‘liquid’ was in my case composed of half quince juice and half unsweetened apple puree, made with local apples of course, which we still have in stock, and 600g of sugar per kilo of juice and puree. I didn’t add too much sugar – many would put kilo per kilo – I wanted to test a not-so-sweet ‘pâte de fruits’.

It takes a bit of time to make the quince juice. Quinces are cut – no need to peel and core them – and then put in the pan with water added so that they are just covered by the water. Cook for at least fourty minutes, stirring occasionally. Some recommend one hour. Pass through a muslin, hanging it above a pan so that the juice can drip. I squeezed the muslin to go faster, and did something else while the quinces were cooking on a gentle heat.

I also added the juice of half a lemon to the 240 ml of liquid, to give some sharpness.

I simmered the mix for a good ten minutes. I had tried a little earlier by cooking an other 240 ml less longer and it didn’t set enough. There were more instructions to use the flakes on the pack but I am not going to detail them here. There may be different instructions for powder, please see the label of the gelling agent you use.

I then poured the liquid in a small square container, actually the one on the photo above. Once cooled down, I cut in square pieces with a pizza cutter, purposefully making them of different sizes to accommodate different tastes and appetites.

I rolled them in granulated sugar, sprinkled on a plate. Caster sugar is an other option, and why not icing sugar if you want to make them look like Turkish delights?. The advantage of doing this, beyond aesthetics, is that the sweets, the ‘pâtes de fruits’, are less sticky.

Having said that, after a day the sugar started to melt, because there was too much water left in the sweets. So now the ‘pâtes de fruits’ are very good, yet they stick on our fingers! They also feel slightly soggy in the mouth.

Next time, I could use quince juice and just add more gelling agent. Actually if I did it with quince juice only, with no apple puree added, it could give a very transparent gelatinous sweet that many would like.

Yet I prefer something closer to the traditional ‘pâtes de fruits’ we received as a present for our birthdays when we were kids. So I will use quince puree rather than juice, and let the water evaporate for longer on the gas, let’s say twenty minutes rather than ten.

It still means saved time compared to the traditional way of making the ‘pâtes de fruits’. And now I think about it… When we were children we liked to choose various colours, which also meant various tastes. We still have Wimbledon redcurrants from last summer in our freezer… I could do red ones then, to contrast with the delicate orange of the quinces… and I could also use a jar of blackberry jam made in September, which I would turn into purple ones. The blackberry ‘pâtes de fruits’ were actually among my favourites.

I am not even talking about the greengage ones… Explosion of 100% natural colours and flavours to come!