Here is the story of the pear and raspberry jam I donated to St Barnabas’ church for sale at their Christmas fair today, and its recipe. Not the best in my view though, I prefer the pear and lemon I made for Abundance.

A few weeks ago, I attended a conference from our local MP Justine Greening about her action as Secretary of State for International Affairs in the current British government. The idea of donating a few jars of jam for a Christmas fair came after the talk during a conversation with the reverend who hosted the event at St Barnabas church here in Southfields.

I had brought a few flyers to publicise the recent creation of Abundance Southfields and we were discussing how to display them. After a while the reverend talked about the fair and it gave me the idea to offer jars. It would raise awareness of the Abundance initiative, bring some additional cash for the church and please the gourmets.

The jam would be made from fruit harvested in the area, in what we call ‘The Grid’, a number of streets forming a particular part of Southfields where there are no pubs and very few shops because the landlord who sold the land for construction more than a century ago accepted to do it at such conditions.

The reverend found it was a good idea and gave me the date of the fair. On Tuesday this week, I went to the church to bring six jars of pear and raspberry jam. This morning, I went to the fair to take a picture of the stall just before the opening.

Jam jars at the St Barnabas church Christmas fair today. I put the address of the blog on the label to give the buyers access to the jam recipe and this story.

I made the jam as usual, adding 750 grams of sugar per kilo of fruit, as well as the juice of half a lemon.
If I remember well, I added 20% of raspberry puree to the pears pieces. I must also have added some apple puree to thicken the jam, as pears contain little pectin. I should have jotted down what I exactly did on the day! Sometimes I add around 10% of apple puree to pear jam, but I don’t do that all the time, as we also like runny jam with smooth pear morsels.
I must have cooked the mix for around 15 minutes from boiling point over a medium to strong heat, stirring constantly.
I made the raspberry puree as explained in the ‘Redcurrant and Raspberry Jam Recipe’, which you can find under the ‘Abundance Fruit Day 21st Sep 2013’ header in the horizontal menu above.

– Williams pears, picked by myself in a Southfields Grid garden whose owners kindly shared their surplus with us. We had picked the pears green and they ripened behind our windows within ten days, thanks to some sunny September days.
– Raspberries: from a South West London pick-your-own.
– Lemon: supermarket.
– Sugar: white, granulated. 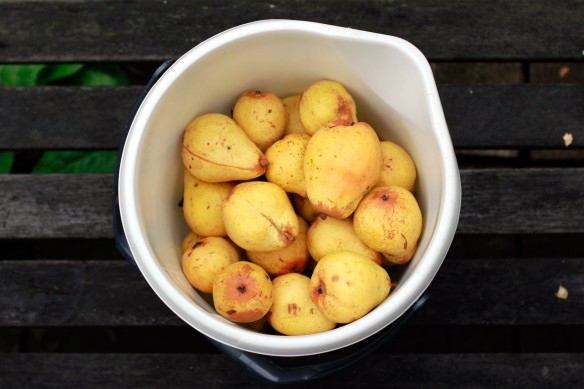 The Williams pears started to ripen quickly after a week behind our windows. This is when we had to act fast not to lose any. This is why we made jam, on top of eating raw some of the best pears we have ever had. Photo 14th September 2013.

Our judgment on this particular recipe:

It was a test, it was the first time I added raspberries to a pear jam. They gave a stronger red colour than I expected, which is OK. Yet, more importantly, in my view they covered the taste of the pears too much.
Our test with lemon (see ‘Pear and Lemon Jam Recipe’ under the ‘Abundance Fruit Day 21st Sep 2013’ header), was more successful because the lemon skins didn’t kill the taste of the pears. On the contrary they somewhat sublimated it.

Anyway I hope the buyers of this pear and raspberry jam will be happy with this product, which remains a premium jam and has the particularity to have been made with excellent quality fruit from the neighbourhood.