It is the peak season for strawberries here in the South West of France. Best time to talk about the most consumed jam in Europe and the US and to show that this jam is not that difficult to make at home.

I already knew that strawberry was the top-selling jam flavour in France and had read somewhere that it was the same in the UK. A quick research on the Internet confirmed that it is also the case in most European countries1 and in the US2. So what about making the most popular jam of all at home?

I made some strawberry jam at the beginning of this week and we will talk about it at the end of this article. But first, I would like to show that there is not just one way of making strawberry jam. Below is in my view a representative sample of the diverse recipe variants, which all play with the specific characteristics of the fruit.

Strawberries contain a lot of water and very little pectin, making the jam difficult to set. But it doesn’t mean that it is hard to make good strawberry jam!

– Prepared with 500g of sugar per kg of strawberries
– Uses jam sugar, which contains pectin
– Cooked for 5 minutes
– Keeps for a week

I put British Jamie Oliver’s ‘Incredible homemade strawberry jam’ (webpage last accessed 30th May 2015) first in my list because it is easy to make and in line with current trends of sugar levels reduction in food. It makes a reduced sugar jam that will keep for a short time because not only does the jam contain low levels of sugar, which doesn’t help with preserving, but also water doesn’t have time to evaporate much when the jam is only cooked for 5 minutes, an other factor preventing the jam from keeping for the usual year or so. Yet as Jamie’s team mentions, it should be long gone before a week! This is especially true if you have a family. If you live alone, I would recommend that you try making the jam with 250g strawberries and 125g sugar to see how many days it takes for you to eat it.
The recipe is also interesting because vanilla is added, which must give it a good flavour (I haven’t tried it yet). We won’t go into other combined flavours today, to keep things simple and focused on the classic strawberry jam.

On the opposite side of the spectrum in terms of sugar content and keeping time is British Vivien Lloyd’s ‘Preserve your own – strawberry jam recipe’ (webpage last accessed 30th May 2015). A lot of water evaporates and the high amount of sugar plus the sugar of the fruit itself results in a high sugar content of the final product, above 60%, which is the current amount required by UK law to call it a “jam” in the trade.
“Pectin stock”, made for instance with gooseberries or red currants (see Vivien’s recipe), will enable the jam to set enough by traditional British jam taste standards. It will also help keep the jam for longer, at least a year.
Vivien’s jams, and British traditional jams generally, are very sweet. Some people make the strawberry jam even sweeter. They follow an old word saying that the proportions should be one kilo of sugar per kilo of fruit. This would be too much, as strawberry doesn’t have acidity.

3. My ‘Simplest of jams’ recipe

‘The simplest of jams’ recipe published in this blog on 6th October 2014 works reasonably well with strawberries. It is in between the two above recipes in terms of sugar content and the 20 minutes cooking time allows for evaporation of a good amount of water, enabling to keep the jam for at least three months.
Yet because of no added pectin the jam will be quite runny, which is not to the taste of everyone. I would advise to add 200g of red currant, gooseberry, apple or blackcurrant puree (or Vivien Lloyd’s “pectin stock”) and the juice of half a lemon to obtain a better set. Sugar jam may be used instead. This will also enable to keep the jam for longer, at least six months, and probably more than a year.
The consistency of the fruit morsels will depend on the quality and probably also the variety of strawberry used, with hardly any morsels at all in some cases, in particular when the strawberries are big, very ripe and full of water.
If you prefer to have no morsels, a potato masher can be used to mush the mix of sugar, strawberries and lemon juice before cooking.

I like the glossy aspect of the morsels in the strawberry jam I made this week. Photo 26 May, Aurillac, France.

To make my strawberry jam this week, I applied the method described in my 10 February 2014 post ‘Candied plum jam’, in order to have perfectly shaped and slightly chewy morsels, which I personally like very much.

I used around 700g of sugar per kg of strawberries as in the ‘Simplest of jams’ recipe, added lemon juice and red currant puree, made with fruit given to me by a friend last year which I kept in the freezer in 200g portions. Unfortunately I didn’t have enough lemon nor red currants at hand, so the final outcome was a slightly more runny jam than usually, even a bit glutinous, as you can see on the picture above. It is so difficult to make the perfect strawberry jam!

First two days (see ‘Candied plum jam’ for more details): the mix of strawberries, sugar and lemon juice was put over low to medium heat twice and left to rest for the strawberries to become slightly candied. The more often this operation is repeated, the more firm and chewy the strawberries become.

After the first two days: separating the morsels from the juice before reducing it. Because strawberries are high in water, a lot of liquid had come out of the fruit. 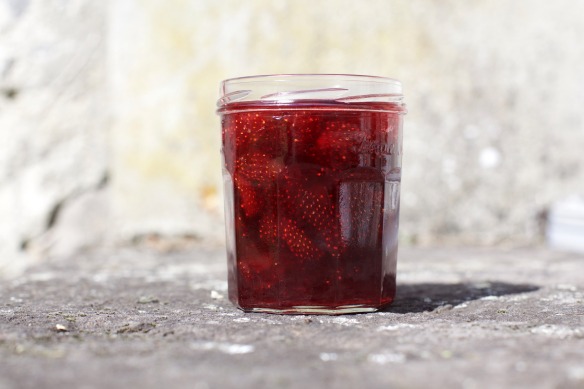 The final outcome was a jam containing a lot of morsels. Very much to my taste.

It is commonly said that strawberry jam is one of the most difficult jams to make. It is only partly true. What is difficult to do is reach an intended outcome, for instance a set but not stiff strawberry jam, or a jam with perfectly shaped strawberry morsels but not too runny. I hope the above list of recipe variants will help to achieve these various outcomes, and more importantly to realise that failing to do so does not necessarily mean making a bad jam. For instance a very runny homemade strawberry jam is still a very tasty product that will make many people happy and a very stiff one is like a sweet! So go for it, give it a try!