The Haute Auvergne is like a large mountain garden here in the heart of France, where we could taste products made with local fruit in a lively and convivial atmosphere this weekend.

Saint Flour, the historic capital of the Haute Auvergne, staged the 15th edition of its traditional music and songs « Festival des Hautes Terres » (the highlands festival) from Friday 26th to Sunday 28th June.

The Festival, organized by the city and its 345 km2 / 16,000 inhabitants district council, is not only an opportunity to discover traditional music from various mountainous regions of Europe, this year the terraces of the Douro river and the small mountains of Tras-Os-Montes in Portugal.

It is also a stage where adepts of French Occitan culture melt with their European counterparts and invite their audience to join in and sing, dance, meet and celebrate together, in what proves to be one of the most convivial moments of the year in the medieval city.

I am not surprised I felt like posting about this event in the « Les jardins d’ici » blog. We have the same love for sharing and enjoying at the heart of our philosophy.
It must be embedded in our genes: I was born in that city.

As in « Les jardins d’ici », it is not just about fruit. The local rhubarb and Madagascan Bourbon vanilla jam goes into the pancake made by an Alsatian woman who married and settled in the Auvergne. The wild elderflower sorbet melts in the mouth during the afternoon heat under the trees near the wooden floor on which beginner dancers develop their skills for the night to come. All around, it is about the human experience of being together and sharing the best we can offer.

Daily special for Sunday lunch: musicians of the Auvergne  and Portuguese musicians join up in a brightly played South-American-like interpretation of a Portuguese song. Photo 28th June 2015, Saint Flour, France.

Practising for the evening. There are dance stages all over the city. 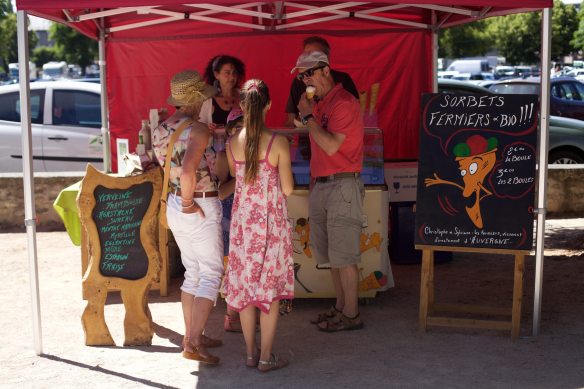 Jam wall… We had several discussions with Dominique, who makes Dom’Saveurs jams, chutneys and cordials. Her rhubarb and vanilla jam (well, Dom’Saveur, as with less than 55% sugar her products cannot be called jams according to French legislation), was a cracker. And her suggestions for pancakes were just great!