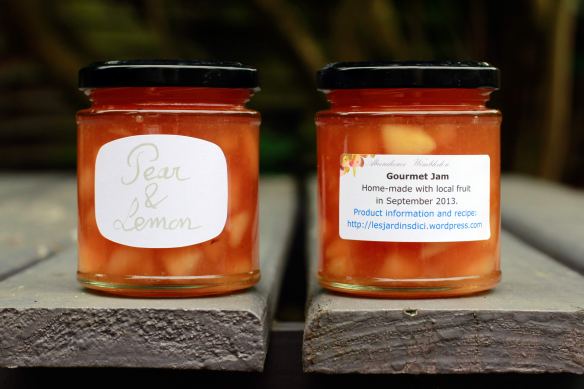 First a big thank you to those who bought a jar of this jam at Fruit Day on 21st September 2013, which helps Abundance Wimbledon finance their non-profit activities.

I hope you enjoy the jam, if you haven’t already tried it at the tasting stall. It’s a combination of the sweetness and smoothness of the pear chunks with a slightly marmalade-like acidity and bitterness brought by small lemon pieces. We were tempted to call this September 2013 creation a “jamalade”, but didn’t want to jam your thoughts with too much novelty. In fact it is primarily a jam, in taste as well as in texture, and it is cloudy rather than transparent.

As promised, below is some product information and the recipe. To create this jam, I was inspired, as often, by French jam-maker Christine Ferber*, and also, in that particular instance, by this  recipe by San Francisco based Rachel Saunders** (link not working on 17th September 2016, couldn’t find a new one).

Pears: Southfields private garden, picked by myself.
Lemons: supermarket.
Apples: given to me by Abundance Wimbledon.

Pears: Williams, very ripe in that particular case.
Lemons: unwaxed, middle size.
Apples: their variety is of little importance as they are added in small quantities to help the jam thicken/set.

– Cut the lemons in 2mm slices and then each slice in two, four, eight etc., until the pieces broadly have a 2mm x 2mm lemon skin.
– Cook over a gentle heat for 20 minutes in a small sauce pan with 50g of sugar per lemon (add a little bit of water and stir so that the lemons pieces can soften without caramelising).

– Peel the pears.
– Rinse quickly and cut into quarters, core, cut the quarters into chunks of one half to one cubic centimeter, in any shape.
– Put the chunks in the main jam pan, add the remaining sugar and the content of the lemon pan.
– Stir gently and leave to rest for an hour.
– Heat, stirring until just simmering.
– Stop heating, cover and leave to rest overnight.

– Turn the apples into a puree, passing through a moulin (sieve with a handle, see image in the redcurrant and raspberry jam page) the apples you will have simmered for 15 minutes in a small sauce pan, adding  some water to them to avoid burning.
– Add the apple puree to the jam pan and stir gently to mix it with the pears and lemon.
– Put the jam pan over a strong heat until the jam boils, then reduce to medium / low heat and simmer for at least 30 minutes. Stir during both phases.
– Check that the jam has thickened by pouring a few drops on a cold plate coming out of the fridge, waiting for one or two minutes before checking. If the jam slightly thickens (it will thicken more in the jars later on), the jam is ready to be poured into the jars.

* ‘Leçons de Confitures’, Christine Ferber, 2009, Editions du Chêne Hachette Livres (book in French).
** In their Pear and Lemon Marmalade post, the authors of “The Good Food” blog mentioned the original author of the recipe, Rachel Saunders, owner of the Blue Chair Jam Company in California, and her jam cookbook, which you can find a link to here: , accessed 24th September 2013.
Link to Rachel Saunders’ new book, accessed 17th September 2016: http://shop.bluechairfruit.com/products/bluechaircookswithjammarmaladeautographedcopy